We are delighted to report that the project to reduce the erosion of the southern river bank in The Meads at Wheathampstead has been completed.

From 23 January to 13 March (ie before the start of the close season), 24 volunteers from Wheathampstead Open Spaces Volunteers, the Herts and Middlesex Wildlife Trust, the Verulam Angling Club and the Environment Agency put in 268 hours' work to get the work done.

We drove 160 chestnut stakes into the river bed along about 80 metres of river bank, and wove willow poles between the stakes to reinforce the eroded bank. Most of the willow poles used for the spiling were harvested from a plantation 50 metres from the river which is pollarded on a two-year cycle. More poles were harvested from Lemsford Springs and from the Verulam Angling Club's fishery at Leasey Bridge (thanks to them for this).

The entire project was paid for with a grant from the Wild Trout Trust. 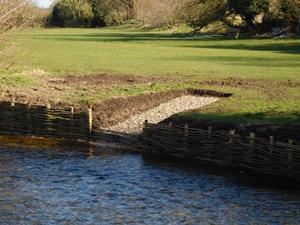