The Upper Lea is the section of the River Lea from Luton Hoo to Lemsford.
After passing through the landscaped surroundings of Luton Hoo Park, the Lea flows in a south easterly direction, passing East Hyde sewage treatment works where the river is augmented twice a day by the discharge of treated effluent. It then flows through farmland until it reaches the parish of Harpenden, passing Batford Springs Nature Reserve.  Here, springs previously used for watercress cultivation bring pure, crystal clear water to the surface and add to the flow.
Downstream of Batford, the Lea displays some of the best meanders in the county, winding its way through the surrounding land and gathering extra flow from springs at Castle Farm until it reaches Wheathampstead, the main urban area along this stretch. The river flows through the centre of the village, where it has been altered to create a straight flow into what was a water mill. There is now a weir here which is used when flows are high. The river passes through The Meads, a well-loved recreation area.
After Wheathampstead, the river once again displays a meandering course, having largely escaped the straightening and dredging that have damaged so many of Hertfordshire’s rivers. This changes when the Lea reaches another landscaped park - Brocket Park - where it has been modified into a small lake called the Broadwater.
Downstream of Brocket Park, the river reaches Lemsford Springs nature reserve, where the river flows adjacent to a complex system of springs and old watercress beds. This is an area rich in habitats and wildlife, especially important for green sandpipers.

Originally, the Lea would have been a true chalk river, fed predominantly by springs. However, groundwater abstraction has dried up many of these springs, and much of the river’s water now comes from East Hyde sewage treatment works. Despite having rigorous high standards for discharged water, this does mean that the water contains relatively high levels of phosphates and nitrates, and many would argue it can no longer be classed as a chalk river. Although sections of the river are relatively untouched and still display its natural meandering course, in places it has been modified by straightening and dredging, and weirs have been installed to create mill leats. Invasive species like Himalayan balsam are problematic, and mink predation has driven water vole populations to extinction. Horse grazing is common in the catchment, and in certain areas this has resulted in poaching and erosion of the river banks and a lack of bankside vegetation.
Despite these problems, the Upper Lea remains one of Hertfordshire’s finest fishing rivers and supports excellent fish populations, including barbel. 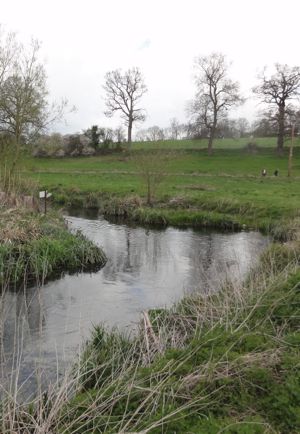