The River Ash rises near Brent Pelham in the north of the Hertfordshire.  After passing through the villages of Little Hadham, Hadham Ford and Much Hadham, the Ash flows south westerly, passing Widford and its sewage treatment works and entering the Easenye Estate.  The river then flows through arable and grazing land until its confluence with the Lea near HMWT’s Amwell Nature Reserve.  This complex of wetlands and open water is one of the best sites in the county for waterbirds.

The Ash catchment is chalk, overlain with clay.  Consequently the river has characteristics of both gentle chalk rivers and those ‘flashier’, more erosive rivers with a clay catchment.    Although sections of the river are relatively untouched and still display its natural meandering course, in places the river has been modified by straightening and dredging, and weirs have been installed in the past to create mill leats for water mills.  Invasive species like Himalayan balsam are problematic, and mink predation has driven water vole populations to extinction. Grazing is common in the catchment, and in certain areas this has resulted in poaching and erosion of the river banks and a lack of bankside vegetation.

Despite these problems, the Ash remains the only tributary of the Lea to achieve Good Ecological Status along part of its length. 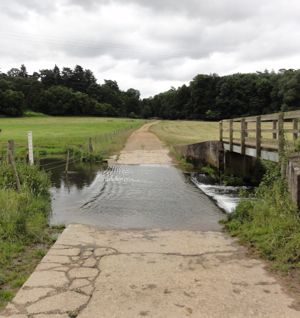