The Susi Earnshaw Theatre School is one of the ten schools in the successful 'SuDS for Schools' project which focuses on the Pymmes Brook Catchment.

The Susi Earnshaw is a secondary school in Barnet.
Water carrying pollutants and sediments previously ran off the school's car park and and buildings causing flooding to some of the buildings before flowing into the street drains abd into a tributary of the Pymmes Brook.

The water is now directed into the SuDS feature via a new tarmac river.

The SuDS is comprised of two sub-catchments. At the end of the tarmac river is a grass strip which takes sediments and hydrocarbons out of the surface water runoff before the water travels into the Mediterranean gravel garden. The second sub catchment takes rainwater from the roof of one of the school buildings, filtering it into a grass strip, then into a bog garden and pond feature. 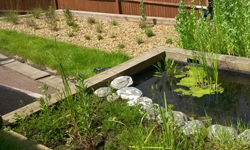