The Middle Lea is the section of the River Lea from Lemsford to Hoddesdon.
After passing through the nature reserve of Lemsford Springs, the Middle Lea crosses underneath the A1(M) motorway, and flows adjacently to Stanborough Lakes, a council-owned leisure area and water park.  Stanborough Reedmarsh, also crossed by the river, is a nature reserve owned and managed by Herts & Middlesex Wildlife Trust.

After leaving Stanborough,  the river enters the Hatfield House estate.  During it's transit through this historic landscape, the Lea flows through parkland and then agricultural land.  This part of the river displays some beautiful meanders, having escaped some of the strightening which has befallen so many local rivers.

After leaving the estate, the river reaches Bayfordbury, home to a campus of the University of Hertfordshire, and then Hertford. Hertford is a true river hub, and here the Lea's flow is augmented by it's tributaries - first the Mimram, then the Beane, Rib and Ash.

From this point onwards the course of the Lea is split into various different channels, including the New River and the Lea Navigation.  The channels pass through another HMWT reserve - Amwell - before flowing south past Rye Meads - where it is joined by the Stort.  The Middle Lea then enters the Lea Valley Regional Park at Hoddesdon.

Although sections of the river are relatively untouched and still display its natural meandering course, in places it has been modified by straightening and dredging, and weirs have been installed to create mill leats. Invasive species like Himalayan balsam are problematic, and mink predation has driven water vole populations to the brink of extinction. THe management of water, via flood relief channels, locks and diversions, is a characteristic of the lower part of the Middle Lea.
Despite these problems, the Middle Lea remains a popular fishing river and is home to many Angling Clubs along it's course, including Amwell Magna. This is the oldest angling club in Britain still fishing the same water, a stretch of the Old Lea which was fished by Izaak Walton, author of the 'Compleat Angler', in the 17th century. 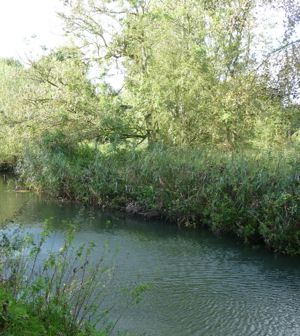