The River Rib rises near the village of Buckland in East Hertfordshire.  It's route southwards takes it mainly through agriculatural land, until it reaches Buntingford. Flowing southwards, the Rib continues to run almost parallel to the busy A10, eventually reaching Braughing where it is joined by it's major tributary the River Quin.

The Rib continues southwards, passing alternately through farmland and the villages of Puckeridge and Standon.  Eventually the river abandons it's north-south orientation and turns westwards, flowing between the villages of Thundridge and Wadesmill.  After this, the Rib again flows southwards under the A602 and adjacent to the complex of lakes at Westmill fishery, before finally ending its 19 mile journey and joining the River Lea on the east side of Hertford.

The River Rib is not a classic chalk stream, displaying many characteristics of rivers with clay catchments and being relatively 'flashy' in nature.  However it does receive flow from groundwater, making it vulnerable to some of the low flow problems associated with chalk streams.  Run-off of soil into the river and the resulting siltation are major problems in the Rib catchment, and pollution is also an issue.  The river is also prone to flooding, a problem made worse but the high levels of run-off of water from surrounding land.  Invasive species such as HImalayan balsam, giant hogweed and signal crayfish are also problematic.  However, the catchment the only know UK site for the rare sedge Carex cespitosa.  This site is threatened by Himalayan balsam and has been a focus of some conservation effort in recent years. 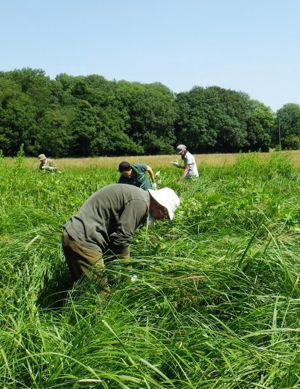