Locals have built path to employment in Luton park

A group of Luton volunteers has been hard at work in Marsh Farm. Over the past six weeks they’ve created a path through Leagrave Park’s Rotten Corner – now a lot more inviting than its name suggests!

The volunteers learnt practical landscaping and woodland skills by creating 300m of bark mulch path and 100m of boardwalk. The route is already proving popular with appreciative dog walkers!

Participants also received training for the CSCS and the City & Guilds Health and Safety in a Construction Environment tests. Passing both gets them a full CSCS card – crucial for working in the construction industry. Three volunteers have passed their tests already while the others will take theirs in the New Year.

The regeneration of Rotten Corner reflects the improvements the volunteers have made to their own job prospects. When asked about the project, Neil said: “When you’re unemployed, it’s important to get out there and meet new people. And the project being local makes it more pertinent because I go to Leagrave Park for walks.”

Mason, also from the area, agreed: “Doing work for the community has been the most motivational part. The whole thing has motivated me to change my life and get up and do something.”

This is exactly what Mason has done, having secured himself a job in retail after interview preparation with Groundwork staff.

Neil is motivated by Mason’s outlook. “When I was your age I wouldn’t have entertained that attitude. Volunteering? No money: no way! There’s a lot of negativity about the young so the fact you’re thinking like that is bang on.”

The group celebrated their achievements on Thursday (18 December 2014) with several council members and representatives of local organisations in attendance. They will now receive another month of support from Groundwork to help them into their chosen professions.

In being so close to the source of the River Lea in Leagrave Park, this Green Skills project supports the work of the Luton Lea Catchment Partnership. 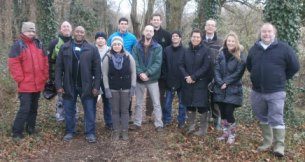