The Wheathampstead Open Space Volunteers have been making significant progress in delivering the restoration plan for the River Lea as it flows through East Lane Carpark in Wheathampstead.

The group led by local residents Mark Carter and Patrick McNeil (HMWT Living Landscapes Champion) with support from Wheathampstead Parish Council and Herts and Middlesex Wildlife Trust, have been working to improve the habitat of this stretch of river since Autumn 2015. Overhanging branches and trees were pruned back during autumn and winter to let more light into the river.

With consent from the Environment Agency work has now begun to install a series of brash buildouts and flow deflectors in order to increase flow diversity and create instream habitat to what was a straight channel with few instream features. Over three sessions the group has now installed two brash build-outs and four flow deflectors.

HMWT Living Rivers Officer David Johnson joined the group on their most recent work party. The river was flowing high due to the recent summer storms providing some difficult working conditions but the group persisted with their task for the morning to install two of the deflectors and one of the brash buildouts. 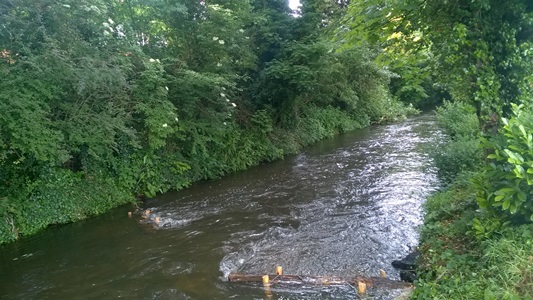 The group's hard work showed instantaneous results. As well as the noticeable change in flow regime, the wildlife in the River Lea quickly took advantage of the new instream habitat. A large shoal of Minnow were seen taking shelter from high flow in the slack waters behind one of the new flow deflectors before installation was even complete.

Ongoing monitoring of the river by the Chilterns, Herts & Middlesex Riverfly Hub will help the Catchment Partnership to determine the success of this project.