A Wheathampstead volunteer has been awarded the title 'River Champion' by The River Restoration Centre for his work on the River Lea.

Patrick McNeill volunteers for Herts and Middlesex Wildlife Trust and spends around half of each month monitoring and reporting on the condition of the River Lea. Over the five years he has volunteered on the Lea, Patrick has inspired his community to come together and embrace their local river and the Catchment Based Approach - a community-led approach that engages people and groups from across society to help improve precious water environments - through community talks and local engagement.

The River Champions Awards exist to acknowledge the often unsung heroes of the conservation world. The success of river improvement projects is largely contributed to by volunteers and the awards celebrate the outstanding efforts of individuals contributing to river restoration in their area. It aims to recognise those dedicating time outside of their day-to-day roles to contribute toward improving rivers for wildlife and people.

Patrick is known locally as 'The River Man' and works closely with the parish council and landowners. He has developed and delivered 15 projects to enhance the river, including the near complete eradication of Himalayan Balsam from his town.

Patrick McNeill said: "I am very pleased to have won this award – it was a real surprise! What really made me proud was that it was based on my involvement with the community as much as my knowledge of the river."

David Johnson, Living Rivers Officer at Herts and Middlesex Wildlife Trust, said: "Patrick really deserves this award; he works hard to monitor and protect his local stretch of the River Lea and the difference he has made is clear. This award really goes to show what a difference just one individual can make to our local habitat and wildlife. The Trust is lucky to count Patrick among its dedicated volunteers." 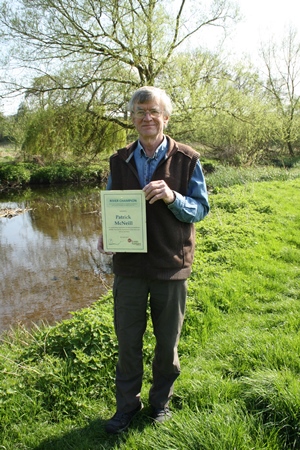