This project aimed to strengthen the river banks which were badly eroded during winter floods in 2014.

The banks were reinforced using a techinque known as willow spiling; willow faggots are staked in place along the bank line and backfilled with soil. New willow trees were also planted so that their roots can grow into the banks to stabilise the soils.

In summer 2015, a number of fallen trees that were causing obstructions and consequent silting in the river were removed. Six months later the positive effects of this action could be seen. There were more clean gravels exposed on the river bed and an increase of in-stream vegetation, such as the chalk stream speciailist water-crowfoot.

The owners of Croft Farm are undertaking ongoing management of the river banks and willow trees, with occasional pollarding to prevent over-shading of the channel. 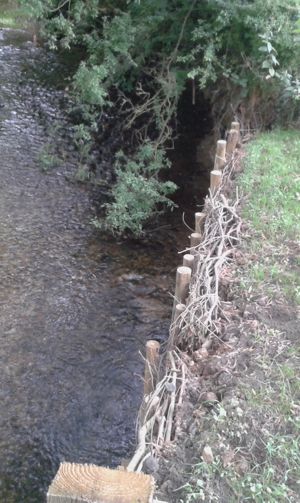