On 8th October 2014, a fish survey was carried out at Singlers Marsh on The Mimram. The survey was conducted by Herts and North London Fisheries Team from the Environment Agency, and yielded some interesting results.

Such a survey is of particular interest, due to the restoration work carried out there earlier this year, namely to remove silt and replace with 60 tonnes of gravel of different sizes in four riffles. This gravel transplant was part of project 4 on the Catchment Management Plan which can be seen here. The idea behind the project was to encourage vegetation growth, to provide habitat for invertebrates and an area for fish to spawn, in particular it was hoped, Brown Trout.

There were 16 brown trout caught, all genuine wild fish, and their lengths measured.  Unfortunately there is no pre-restoration survey data to perform a direct before and after comparison, but from the results the team established that there were two clear age classes present.  Year 1 (90mm - 140mm) which they hypothesise may have been recruited on the newly installed riffles, and older fish (190mm to 240mm) which may have spawned on the new rifles having survived in the area for a reasonable length of time.

11 of the 16 fish caught were juveniles, and 5 of the older category. The team find these results to be very encouraging and a good sign for the habitat within the river.

Here is the frequency length Histogram of the results:

Stay tuned for further results over the coming year for a comparison to these figures at the same location.

A video about the work carried out during the restoration can be seen by clicking here. 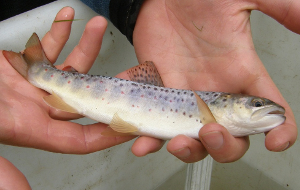