Last week saw a very successful Riverfly training course held on the Mimram at Singler's Marsh. Fifteen new volunteers were trained to carry out invertebrate monitoring on their local river.

The volunteers, from seven different rivers across Hertfordshire including the Beane and Mimram, received training in how to survey for and identify pollution-sensitive river invertebrates.  These include three mayfly species, cased and caseless caddis, and freshwater shrimp.  The training was part of the national recognised Riverfly Monitoring Initiative, designed to allow volunteers to regularly survey their local river in order to monitor its health, and identify any pollution incidents as soon as possible.  The survey method is standardised throughout the country, and the data collected is recognised by the Environment Agency, who have previously used Riverfly data to successfully prosecute polluters.

Charlie Bell, Living Rivers Officer with Herts & Middlesex Wildlife trust, who organised the training, said, 'It's basically a neighbourhood watch scheme for rivers.  It's a great way not only to keep an eye on the health of our rivers, but also to allow volunteers to actively contribute valuable data and add to our understanding of these special places'.

Singler's Marsh in Welwyn, where the training took place, in currently the focus of various river restoration projects, which are improving the river for invertebrates and fish.

The training was given by Steve Brooks of the Natural History Museum , London, who was one of the founders of the scheme.  If you'd like to get involved, please This email address is being protected from spambots. You need JavaScript enabled to view it.- more training courses will be held in the future. 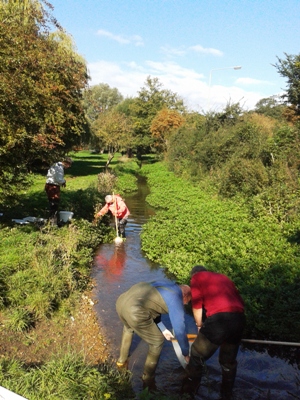