A brand new nature trail that takes in some of the best habitat in Welwyn Garden City has today opened at Tewinbury Farm Hotel.

The Chalk Stream Discovery Trail runs alongside the beautiful River Mimram– known as 'the jewel in Hertfordshire's countryside'. The Mimram is one of only 210 chalk streams in the world - 16 of which are in Hertfordshire.

Herts and Middlesex Wildlife Trust manage Tewinbury Nature Reserve which sits alongside the Tewinbury Farm Hotel, owned by Vaughan and Ivor Williams. They have worked with the Trust to ensure that the stretch of the Mimram running through his land is the best habitat it can be. To share this area which is rich in wildlife, the Chalk Stream Discovery Trail has been opened and includes a number of interpretation boards to allow people to learn more about the habitat and the nature it supports.

The Trail is now open every day for guests of the Tewinbury Farm Hotel and Herts and Middlesex Wildlife Trust members and can be accessed by collecting a key from the hotel reception.

David Johnson, Herts and Middlesex Wildlife Trust's Living Rivers Officer, says: "It is fantastic to be able to open this area of the River Mimram after so much work to ensure it is at its best.

"This stretch of the river supports water crowfoot, brown trout and water voles and it is hoped that by opening the trail, people can experience chalk river wildlife without causing disturbance to its internationally rare habitat."

Vaughan Williams, says: "Ivor and myself are very happy to have funded the trail and to help share this small area of the River Mimram, a part of the two miles which we own and look after. We look forward to welcoming visitors to experience and learn more about this globally rare habitat."

Herts and Middlesex Wildlife Trust sell a FSC Chalk Rivers Guide through their online wildlife shop to help visitors to Hertfordshire's beautiful chalk rivers get the most out of their experience.

The national guide is written by the Trust and produced in collaboration with the Field Studies Council (FSC). The guide illustrates 40 species which are characteristic of chalk rivers. The reverse of the guide gives some background information about chalk rivers, how they are formed, their features and the threats facing them.

This guide was made possible by a generous donation from John Davis, one of the Trusts long-standing members. 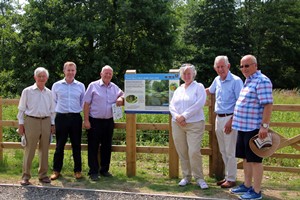