The River Beane is an internationally rare chalk stream habitat which has undergone decades of degradation due to historic weirs which have caused slow flows, sedimentation and blockages to fish passage.

The collapse of part of an embankment on the River Beane at Waterford Marsh just outside Hertford, has meant that a significant stretch of the River Beane is now able to flow again, as it would have done naturally. The weir structure and adjacent channel embankment separating the River Beane from the Molewood Millrace which is in poor condition has breached, meaning that the weir at the bottom of Waterford Marsh, which impounded the river and created poor river habitat upstream, has been bypassed.

Owing to the increased flow rate and shallower water, the river is now moving over cleaner gravels that are essential for our rare chalk rivers, providing perfect fish spawning habitat. In addition, the recovery will mean new vegetated channel and banks will be able to establish, providing better habitat for rare and threatened insects and mammals. The failure of this structure has not led to an increase in flood risk to properties within the area.

We recognise that as a consequence of the breach there has been a drop in water levels in some areas of Waterford Marsh, including the loss of flow to the Molewood Mill Race, which provides habitat for wildlife and is a locally valued and attractive feature. It is therefore our intention to explore how best to support these habitats and whether there is a feasible option to return some flow to the mill race whilst ensuring that the River Beane receives the flows it need to thrive as a chalk river.

The Environment Agency and the Hertfordshire County Council’s Countryside Management Service are working together to explore options to further enhance the chalk stream habitat through the area, as well as protecting the riverside Public Right of Way. This includes stabilising the bank at the breach location, to make permanent the benefits to the river. We will also be discussing options with the relevant landowners whose permissions will be needed.

The Environment Agency has prioritised some funding for the project and as a first step will clear some of the fallen trees and debris from the channel so that the extent of the breach can be better assessed.

We will be engaging with local stakeholders to ensure that the best solution is found for the River Beane, the wider environment and local people. 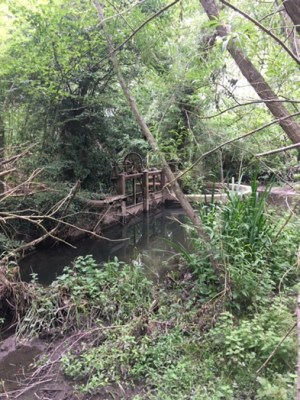