Invasive species are having a devastating effect on native wildlife, and can even cause economic and physical harm to people. This project aims to map and monitor invasive plant species and mink, and coordinate their systematic eradication from the catchment.

Alien species are animals or plants which aren’t naturally found in the UK. They are classed as ‘invasive’ if they spread rapidly and easily, and if they can damage native wildlife and ecosystems, if they can cause economic damage, or if they are dangerous to people.

Many invasive species thrive on our rivers, either because they are adapted to water environments or because they use the river as a natural form of transportation to spread their seeds or offspring. On the Beane, the main invasive plant species are Himalayan balsam and Giant Hogweed. It quickly becomes dominant over large stretches of river, out-competing the native plants and dominating the banks. Its seed pods explode, firing seeds several metres along the bank and into the water, and spreading quickly downstream. Balsam-covered stretches are especially problematic in winter – it dies back completely in the autumn and winter, leaving the banks bare, lacking habitat and exposed to erosion.

Himalayan balsam is very shallow rooted, and pulls up easily. Giant hogweed is dangerous to people – its sap is ‘photo-toxic’- it reacts with light and will blister and burn any skin it comes into contact with. If you find Giant Hogweed it is best to contact the landowner if possible, who will organise specialists to remove it.
Mink are another invasive species, and are the major cause of the decline of water voles on the Beane. Mink rafts are placed in the river to monitor for mink, and if they are present then their trapping is arranged. It is hoped that, if mink are kept under control, water voles may be able to return to the Beane.

Signal crayfish have been found in the river around Hertford and trappers are currently attempting to deal with them. This species carries crayfish plague and spreads it to the native White-Clawed crayfish. It is also a fierce competitor for habitat and is therefore a significant contriutor to the rapid decline of White-Clawed crayfish in the UK.

A co-ordinated, catchment wide approach is needed to locate and eradicate invasive non-native species from the river. For plant species, it is important to work downstream, whilst controlling ‘flashpoints’ throughout the rest of the river. 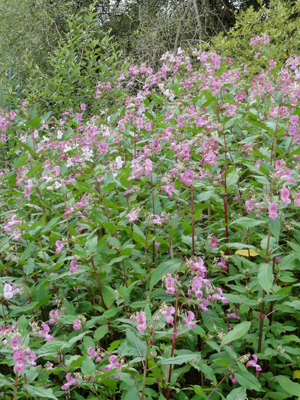