This project will identify and map any invasive plant species along the Mimram, initially focusing on Himalayan balsam, Japanese knotweed and giant hogweed. It will also coordinate their eradication via landowner action and volunteer working parties.

Invasive plant species are plants which are not native to the UK, which spread rapidly and which can cause huge problems for ecosystems, the economy and people. They are particularly prevalent in river systems, as many spread their seeds via the flowing water and require damp soil conditions. Of particular note in Hertfordshire are Himalayan balsam, Japanese knotweed and giant hogweed. Himalayan balsam is the most prevalent, and rapidly becomes dominant in an area, out-competing the native vegetation.  it also dies back completely in winter, leaving the river banks bare and vulnerable to erosion.

Friends of the Mimram coordiante a River Warden scheme, where Friends regularly check a particular stretch of the river to warn of any sign of an invasive species. Himalyan Balsam is the primary problem on the Mimram.

The Living Rivers Project coordinated groups of volunteers to go and pull Himalayan balsam. To find out more about helping out, click here for dates and details.

It is important to tackle invasive species in a downstream direction, clearing the upper reaches of a river before moving downstream. However, in addition to this strategy, the controlling of ‘hotpots’ further downstream will also be beneficial. 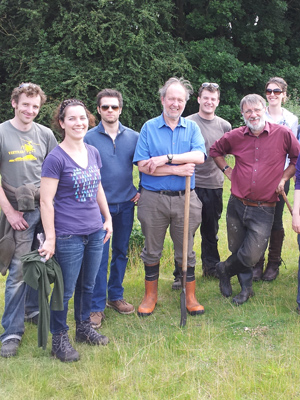