A cutting edge bird-tagging project using GPS tags has tracked a green sandpiper, a small wading bird, from Hertfordshire all the way to Norway and back.

GPS tags weighing only a gram have been fitted to green sandpipers over the last four years to find out where birds from Lemsford Springs near Welwyn Garden City go to breed. The mini-computers record the birds' positions in the world at pre-set intervals during the breeding season. From April to July this year, one bird was tracked on a non-stop, 900km flight to Norway over the breeding season – and all the way back again, to Lemsford Springs.

Barry Trevis, Volunteer Warden at Lemsford Springs Nature Reserve, said: "This April we fitted a green sandpiper with a GPS tag. Data from the tag shows that the bird was at Lemsford Springs Nature Reserve on 26th April and arrived on an island off the coast of southern Norway, Store Saesöy, just two days later. These dates indicate that it would have made a non-stop flight across the North Sea.

"From the end of April to mid-June the bird moved to North Norway, near Trondheim, to breed. After being tracked to a small lake between Hatfield and St Albans on 21st June, it was next seen at Lemsford on 15th July. I was able to recapture the bird on 30th July, when the tag was removed and the sandpiper released. We have seen the sandpiper regularly on the lagoons since then."

Laura Baker, Lemsford Springs Reserves Officer, said: "The tracking of a green sandpiper all the way to Norway and back is very exciting. It really goes to show what can be achieved in conservation when tried and tested methods are teamed up with new science. We now have a greater insight into how far these birds travel – quite a distance, it turns out! We will continue to monitor the green sandpipers and use this information to help us manage the reserve in the best possible way for the birds.

"Lemsford Springs Nature Reserve is a very special site in the UK for wintering green sandpipers. Last year we distributed 85 tonnes of gravel here, to improve the specialised habitat of the cress beds. This supports a large number of freshwater shrimps, welcome food for our green sandpipers and lots of other wildlife. We will be continuing this work and look forward to welcoming more people to the reserve so we can show them how special this place is for wildlife."

Green sandpipers have been the subject of a long-term study at Lemsford Springs, led by local experts Barry Trevis, Ken Smith and Mike Reed, since 1983. The birds are known to spend up to 10 months a year on the reserve and nearby wetlands, many returning year after year. Green sandpipers usually migrate to Northern and Eastern Europe to breed, with just a few pairs recorded breeding in northern Scotland. 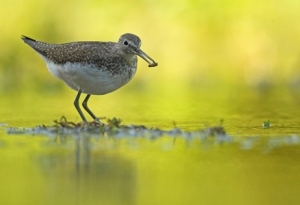