Guests spent time kick sampling in the reserves lagoon before being introduced to the ecology of the invertebrates and fish they had found by HMWT's Living Rivers Officer David Johnson. Finds included freshwater shrimp, mayfly nymphs, cased caddisly larvae, stickleback and bullhead which were the evenings highlight. Returning along the bank of the River Lea by torchlight the group were able to see shoals of chub and a glimpse of a large barbel. 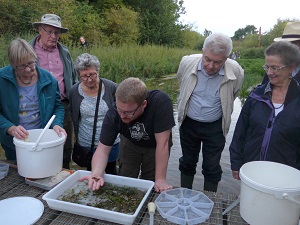