Herts and Middlesex Wildlife Trust have won an award from the Hertfordshire Branch of CPRE for their work monitoring and protecting Hertfordshire’s rivers. The Trust also received a judges’ commendation for their work on reedbeds at Amwell Nature Reserve.

At a ceremony on Tuesday evening, the Trusts’ work as part of The Chilterns, Hertfordshire & Middlesex Riverfly Hub was the overall winner in the Environment category of CPRE Herts’ ‘Rural Living’ awards. The Riverfly Hub is part of a national volunteer-led river monitoring project that focuses on the sampling of pollution-sensitive insects to gauge the health of rivers.

The Riverfly Hub, funded by Affinity Water and supported and delivered in partnership with the Environment Agency, focuses on monitoring three main insects - mayflies, stoneflies and caddisflies – and the data collected will allow for long-term changes to the river to be identified. The Hub has the ultimate aim of setting up and supporting riverfly monitoring on every river in the Chilterns and Hertfordshire.

David Johnson, Living Rivers Officer at the Herts and Middlesex Wildlife Trust, said: “We’re delighted that the work of the Riverfly Hub has been recognised by CPRE .This award acknowledges the hard work of volunteers throughout the county. The chalk rivers in Hertfordshire are globally rare and the Riverfly Hub plays an essential part of their monitoring and management”.

Herts and Middlesex Wildlife Trust were also recognised for its ‘Reedbeds for Bitterns’ project at Amwell Nature Reserve. The project significantly improved the reedbeds at Amwell - vital habitat for bitterns, one of Britain’s rarest birds. The work, completed in June this year, saw new ‘rides’ cut through reedbeds, new ditches created and the reprofiling of the edges of the lake and expanded bays to create new open water habitat along the wetland margins.

Jennifer Sherwen, Reserves Officer at Herts and Middlesex Wildlife Trust, said: “The reedbed work at Amwell has created a fantastic habitat for bitterns. Bitterns are very rare and under further threat from loss of habitat so this is really important project. We’re very excited that CPRE has recognised the hard work of all our volunteers”

The work at Amwell was made possible by a grant from The Veolia Environmental Trust, who awarded a grant through the Landfill Communities Fund, and was also supported by East Herts District Council and Councillor Jeanette Taylor.

Paul Taylor, the Executive Director of The Veolia Environmental Trust, said:
“The Wildlife Trust need to be congratulated on these achievements. The projects recognised by the CPRE have created stronger and more diverse habitats for Hertfordshire and we are pleased to have been able to help make this happen.” 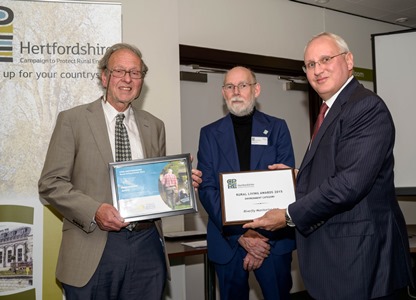