Restoring one of the UKs oldest brown trout fisheries.

The Amwell Magna is an historic private fishery on the River Lea that is mentioned in Isaac Walton's famous book "The Compleat Angler, 1653."

The river is well managed by an active angling society, who long to see full flows returned to the Old River Lea, which has suffered low water levels in recent times as a result of a combination of issues including water abstraction (for public supply), canalisation and introduction of weirs, sluices and flood defences throughout the Lea Valley.

As a result of technical issues with a Thames Water weir, the old River Lea experienced prolonged low flows over several years, resulting in a mitigation project that not only fixed the issue at the weir, but also addressed habitat degradation throughout 2km of the fishery as a result of flood defence infrastructure.

In 2018, work was completed to restore habitats throughout the fishery to better support its iconic wild brown trout population as well as its course fish and angling interests.

Around 2km of the fishery was improved as part of a design and build project delivered by Five Rivers, which involved introducing and redistributing thousands of tonnes of gravels, re-meandering the straightened water course using bank regarding and large woody habitat pinned into the bank as well as undertaking tree management and ecological surveying.

The fishery is montioring the ongoing effects of the restoration on wild brown trout stcoks and juvenile recruitment. 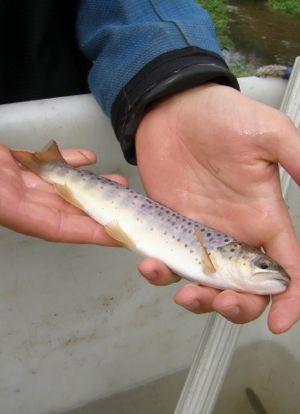