In February 2016, Affinity Water and Luton Borough Council began working on an exciting project to enhance the local environment and habitat along part of the River Lea that runs through Manor Road Park in Luton.

The Manor Road Park river improvement is one of a number of projects that are taking place as part of the Revitalising Chalk Rivers partnership, a collaboration between Affinity Water and the Environment Agency. These improvement works will help to restore and improve the habitat of chalk streams along the River Lea and rivers in other catchments.

A variety of pressures over the years have impacted on the River Lea's health. These include modified river banks and the river being diverted through tunnels and under roads and buildings. Pollution from nearby roads and the surrounding area also runs off into the river.

The aim of the Manor Road Park project is to help the river meet the requirements of good ecological potential under the EU Water Framework Directive. To improve diversity of river flow and increase fish and insect populations.

The purpose of the project was to naturalise the river as much as possible, for example by adding meanders to areas that have been straightened. This has not only helped the river's biodiversity (i.e. mammals, fish, invertebrates and plants), which in turn has helped the river meet the requirements of the Water Framework Directive, but has also made it more resilient to low-flows. Furthermore, the risk of flooding from the river has been reduced where possible and opportunities have been taken to improve public amenity by allowing people to better engage with the river.

The project was completed in May 2018 and has connected the river to the surrounding environment by removing the concrete steps and channel, which confined the river along the edge of the park behind iron railings. The new flood plain provides another 1,550m3 of flood capacity which will help ease flooding further downstream during times of high flow. A riverside path now runs alongside the new meandering river, with natural benches within the banks to sit on and admire the specialist chalk stream plants which have been plant along the berms and banks.

The new in-channel features of pools and riffles will help improve the diversity of flow in the river and encourage fish and insects to flourish within the new chalk stream habitat. 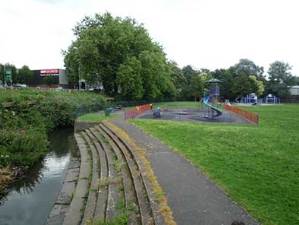 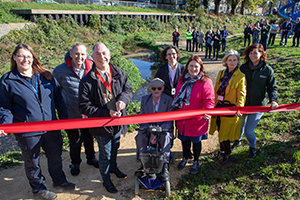