Herts and Middlesex Wildlife Trust (HMWT) together with support from Environment Agency and the Lee Valley Regional Park Authority, has installed two new eel passes in the Lower River Lea to aid eel migration from the River Thames.

The passes were installed on Holyfield Weir in the Lee Valley Regional Park on September 8th and are intended to help address the dramatic decline in eel numbers in recent years. Over the past three decades global stocks of European eel (Anguilla anguilla) have declined by 95% leading to their classification as a critically endangered species on the IUCN Red List. It is believed that the dramatic decline in eel numbers is due to a number of factors including habitat loss, barriers to migration, parasites, pollution, over-fishing and climate change.

The eel passes, which form part of HMWT's larger 'Slimy Wrigglers' project to conserve and enhance eel numbers in Hertfordshire, allow eels to wriggle their way up a bristle lined box, to reach the other side of the 1.2 metre high weir.

Holyfield Weir was identified by the Lower Lea Catchment Partnership as the first impassable migration barrier on the Lea that did not already have an eel pass or easement. HMWT was awarded £28,500 from the Catchment Partnership Action Fund with an additional £4000 from the Environment Agency, to investigate solutions. In partnership with the Environment Agency, HMWT has worked with local engineering firm Unitspark Ltd to design, fabricate and install two eel passes on Holyfield Weir.

Phil Belfield, Fisheries Technical Specialist at the Environment Agency said, "This project will allow migrating eels to move a further 2.5km up the Lea Valley as well as providing eels access to high quality still water habitat at Nazeing Marsh."

Herts and Middlesex Wildlife Trust's Living Rivers Officer, David Johnson, said: "The Slimy Wrigglers pilot project is critical to improving the chances of our European eels in the River Lea. Without these passes eels are unable to migrate and thrive. We will closely monitor the results, with the aim of strategically planning and installing further eel passes in future to allow further migration up the Lea catchment." 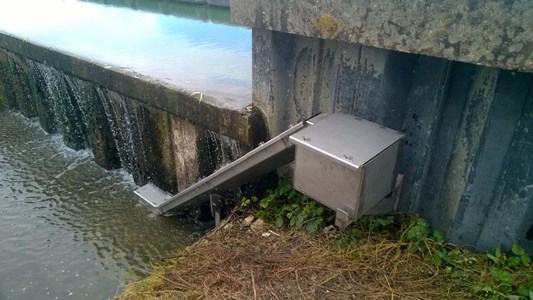