The area considered in this plan covers the Lea Valley from Hoddesdon to Waltham Cross and includes tributaries which join the Lea from wider Essex and Hertfordshire. It forms part of the Lea Catchment Nature Improvement Area (NIA). The northern part is strongly influenced by open farmland, mostly on the eastern side. Here large greenhouses are commonplace, used for growing vegetables. The west side of the area is bordered by a mix of housing, warehousing and light industry. The character is heavily influenced by the numerous irregular, small to medium scale water-filled former gravel pits through most of its length. There are extensive areas of abandoned workings, which have regenerated with reedy margins, grasslands, scrub and wet woodland. In places, the land is of high value for wildlife and includes several sites of special scientific interest (SSSIs); Turnford and Cheshunt Pits, Waltham Abbey and the Cornmill Stream and Old River Lea, the first site forming part of the Lee Valley Special Protection Area (SPA), on account of the internationally important wildfowl populations found there.

For the most part, the rivers in this section have been heavily modified and the area includes a number of man-made channels which form part of a flood prevention scheme. However, there are some sections of river which exhibit quite natural forms, notably the Old River Lea at Fishers Green and Cornmill Meadows and the Small River Lea at Cheshunt. The River Lee Navigation (canal) runs through the length of this catchment.

The Water Framework Directive classifications for the (upper) Lower Lea vary from bad through poor to moderate with only the man-made New River achieving a good status. A large sewage treatment facility is at Rye Meads. Non-native invasive plants include Himalayan balsam, giant hogweed and Japanese knotweed. American signal crayfish are widespread in vast numbers. American mink are numerous and pose a continuing threat to water voles.

Much of the area lies within the Lee Valley Regional Park where management aims to balance the needs of wildlife with public use for recreation. This part of the Park is very well used, with over 1.3 million visits annually. Angling is popular throughout the catchment with carp being the focus within still waters. Of note is the presence of barbel in the Old River Lea at Fishers Green. However, structures such as weirs are a significant barrier to the movement of fish and in particular, eels. 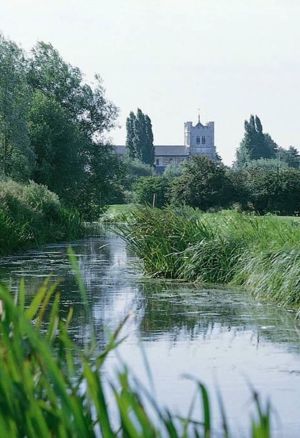